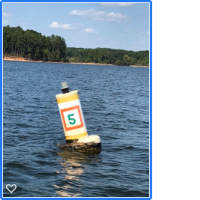 Buoy_5 USAMember Posts: 2 ✭
September 2019 in Hurricane Deck Boats Forum
Hello fellow Hurricane owners. Here's my story: Been around boats all my life, Dad was a Glasspar/Wellcraft/Mercury OB boat dealer back in the 60's and 70's. First boat I bought was a '66 Glastron with a 95HP Mercury, sold it and bought a 89 Larson 170 (Mercruiser 140), bought a 83 Hydrosport Bass boat with Mercury 115, sold them and bought a 1994 Proline 192 TC with a Mercury 135, bought another bass boat '98 Procraft with 150 HP Mercury, sold them and bought my first Hurricane SS 201 back in 2013 with a Yamaha 150 as my family needed more room. As you can tell I was a died in the wool Mercury man and I really went out on a limb to purchase a Yamaha, but it was a great boat/engine. Decided in March of 2018 to trade it in on a Nautic Star 211 Angler with a Yamaha 150 as I wanted to get back to more fishing (trolling). The Nautic Star was a good boat but just did not have the ride of my previous Hurricane. Found myself many times slowing down when meeting another boat's wakes to not jolt my wife out of her seat up front. Wife said "This boat doesn't ride as good as the Hurricane". I just shrugged it off and under my breath I knew she was right. Also when bringing my kids and grandchildren, there just wasn't enough room. So, back in August of his year, started looking for another boat. Looked at some tritoon's but decided they were to big to load/unload. Went back to the Hurricane dealer and traded for another SS 201. Surprised they re-designed the interior for more seating. Took what he had in stock (2020 model) and It's the same color as the 2013! This time it's powered by a Suzuki DF150. Bigger displacement and higher compression ratio so it can run a higher diameter prop and it's impressive. Got 10 hours on it now, so far so good. Currently rigging it up with some trolling equipment so I can fish out of it. When meeting another boat's wakes or in choppy water, I don't have to pull back on the throttle and it glides right over them just like the 2013. I don't know what makes it such a great riding boat!  I just want to remind readers, since you have a Hurricane, don't stray away from the brand. In my opinion, you just cant beat the ride or the quality!  Oh yeah, When the wife's happy, everybody's happy. - clear